Have you noticed how a list can be intimidating? Or is it just daunting?
“I’ll just go and get a few things at the shops” you say.
“While you are there can you get the things on the list?” is the reply.

A quick trip becomes a half-day program as you search for each item, queue up at the register then lug the loot home and pack it away.

Well, it’s a bit like that with the boat maintenance. Chimere came back safely from Vanuatu in August 2009 resting happily on her mooring proudly wearing a few scars from her adventure away. Actually it is bits of rust. Rob and the crew did a terrific job cleaning up before leaving, but as they left Rob said, “we made a list. It shouldn’t take long to work through. Can you organise a working bee to get the stuff done?”

With that they said good-bye and flew to Melbourne. (1,000km away from where Chimere is moored) 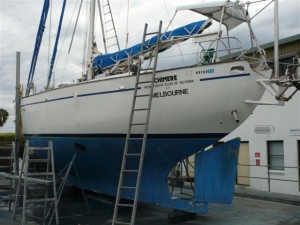 Up until then we had only spoken of the individual items aboard that needed attention. It didn’t seem too bad. Now there was a list where all those items were recorded. The list stared back at me when I tried to read it. Each item was a working bee on its own. There were 2 pages of closely written items to be attended to. I was starting to think about how many working bees that added up to.

We are well served with marine businesses in this part of the world. Before Chimere left on her Vanuatu adventure we had a lot of help from a number of very skilled individuals who did a huge amount of work, like engine servicing, generator repairs, repairs to rigging, stainless steel welding, aluminium welding, installing new electronics and wind generator to name a few. With Rob’s list in hand I thought it was time to talk it over with Tony Griffin of Griffin Marine, who had done the lions share of the pre-departure work. He also organised quite a few things while we were away to keep us supplied with spare parts. Tony has a big team of tradesmen each with different skills. Together with Mario Ruel (rigger) and Peter Ash (electrician) there was nothing on the list they couldn’t tackle.

Here is part of that list; things done and things yet to be done.

Remove every deck hatch to treat rust underneath. In so doing he was able to treat the normally inaccessible steel beams supporting the deck. While the hatches were off they were adjusted to fit the curve of the deck precisely to improve their water tightness.

Remove everything from the anchor well (a half day job on its own) and set about reorganising it so that;
1/ the chain self feeds into the well
2/ that everything has a place,
3/ the manual and electric bilge pumps were replaced with heavy duty models and
4/ a new deck wash hose and tap installed.

The engine was serviced including removing the exhaust to find a leak and adding more heat insulation when it was reinstalled. It was interesting to learn that after using about 3000L of diesel on the trip the first fuel filter was very dirty while the second in line, just before the motor, was perfectly clean. The system is working.

Installed a manual back-up fuel pump to lift fuel from the bulk tanks to the header tank in the event the electric pump fails.

The guys added a really nice touch. It followed a disparaging look at the chop sticks we use to hold the port holes open. A neat little chain with a hook on the end for each port was made up. Now all we have to do is put the little chain on the port and it stays open. Brilliant. Then there is the annual repaint of the boat’s bottom. This required booking a spot on the Royal Prince Alfred travel lift. Our time came along just when the engine was being worked on so poor old Chimere was towed to the lift. The travel lift is rated to 50 tonnes so it had no trouble with our 25-30 tonnes. The massive bulk of Chimere out of the water took up a fair bit of space and we were tucked away into a corner of the yard. The hull was cleaned and painted and the topsides (above the water line) polished. While hanging in the travel lift the centreboard was checked and painted too.

A new regulator was installed on the generator and a bearing noise is being attended to.

The air-conditioner is being repaired

Self Steering (auto pilot) was repaired.

The top sides and deck were painted.

And a list of rigging repairs is currently under way.

I don’t think I’ll mention any more items. It makes me weary. The work started in September 2009 and has progressed in little steps since then until we are now at the stage of rushing to the finish to get everything done in time for a planned departure in mid April for the 2010 voyage.

2 thoughts on “Preparing The Ship”