As Bob said in his log the weather has been a challenge since Monday. Strong, cold SW winds. Right on the nose making it difficult to hold a straight course for Sydney. Seas braking over the bow constantly sending spray flying. Down below everything became wetter and wetter. In these conditions we thought Bob was right to think they wouldn’t be in till Saturday. However, late this morning we had a message to say they were only 30 miles from the heads. That meant they should be in this afternoon. They had made great time in spite of the conditions. 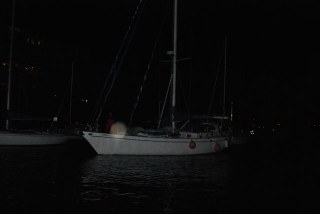 I got in the car and started driving from the Central Coast (about 100km north of Sydney) with the aim of getting to Bradley’s Head on the harbour in time to see Chimere come through the heads. Rob and I exchanged phone calls during the rest of the day. I also rang David Amy who I knew was on his yacht in the harbour and who was looking out for Chimere too. David was on radio watch, listening in for Chimere making calls. Around 1:45pm David rang to say he was listening to Bob talking to Customs. When finished, David made contact too. Chimere was getting closer. I picked up our daughter, Liz from Bayview and continued on to Bradely’s Head We found the last car spot at Bradley’s Head. It was busy because a wedding was going to be held there today. The cold, gale force winds blasted the wedding party and they shivered their way throught the service. Once parked, a stretch limo parked across the parked cars locking us in.

Liz and I didn’t have long to wait and Bob rang to say they were tacking into the harbour. A few minutes later I could see them in the distance with the cliffs of north head rising behind them. The gallant crew tacked their way up the harbour, dodging the Manly ferries coming and going, and weaving in between the navigation markers along the way. Chimere looked beautiful as she sailed past the city skyline, the opera house and finally the bridge en route to the Customs dock. Once Chimere was out of sight we got back in the car, did a multi point turn to manoeuvre past the stretched limo and drove around to the Cruising Yacht Club of Australia. Liz went to the city and I waited at the CYC.

One of the crew from last year, Jo Lewis, came down to the CYC too and we killed the time swapping stories of sailing in Vanuatu. Later a call from Bob to say they were 10 minutes away, had us leaving the warmth of the club house and scuttling down the jetty to where Chimere should be appearing any moment from somewhere out of the blackness of the night. Very soon we saw some navigation lights and knew it would be Chimere. Chimere quickly materialised and the guys brought her gently along side. With perfect timing other family members of the crew appeared on the jetty. A very relieved crew, bedecked in their wet weather gear and sporting big smiles, lined up along the gunwale to call out their hellos and pass lines ashore. The delivery trip came to an end at that moment. We all crowded into the saloon and shared around the last tuskers for a toast.

A big thank you to the crew, Bob, Carl, Rhod, Tony and Rim.